In every child there grows at least one life dream, but not every child has the opportunity to grow
into that dream. With every second child in the world living in poverty, there is an exceeding
number of youth unable to pursue their life's full potential. 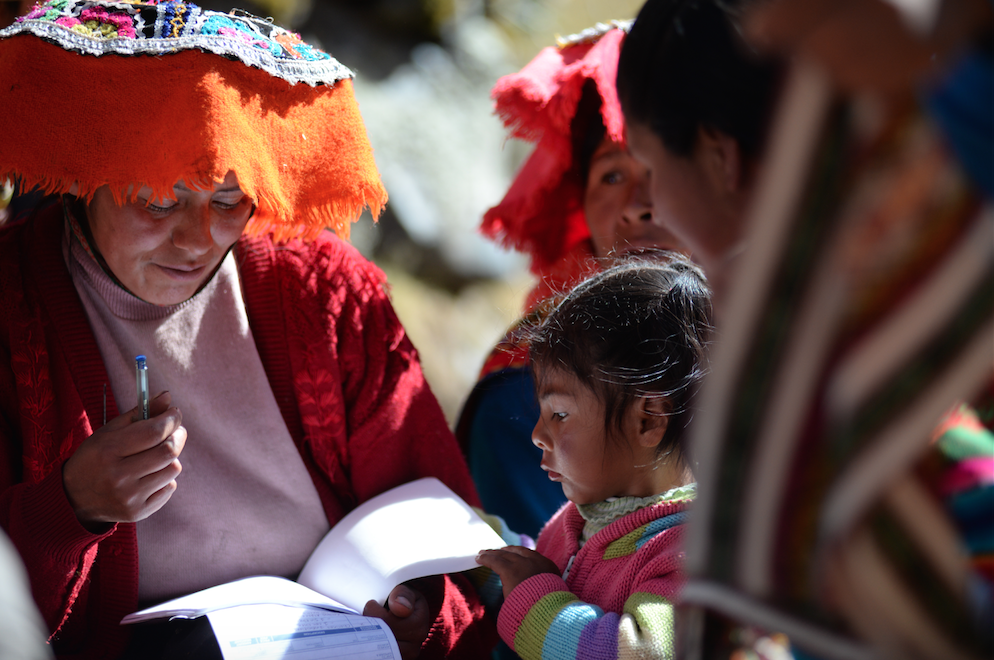 [A child of the Pitukiska community looks curiously at a textile financial spreadsheet. Photo by
Mike Graeme.]

Thanks to global capitalism, poverty is pandemic; we are all wound up in it. Our globe gets woven
in ways that polarize wealth, leaving some so rich that if they had the generosity they could feed
whole countries, while others are so poor they are unable to feed even themselves.
According to the Rural Poverty Portal, "The poorest of the poor in Peru are in the arid Andean
highlands, where a large majority of the indigenous Quechua and Aymara communities live below
the poverty line."

In 2006, while living in Ollantaytambo, a Quechua community in the Cusco region of the
Peruvian Andes, Ashli Akins started laying down a solution—an ingredient of the medicine for
Peru's poverty pandemic—and founded the international charitable organization, Mosqoy, which
means “dream” in Quechua. 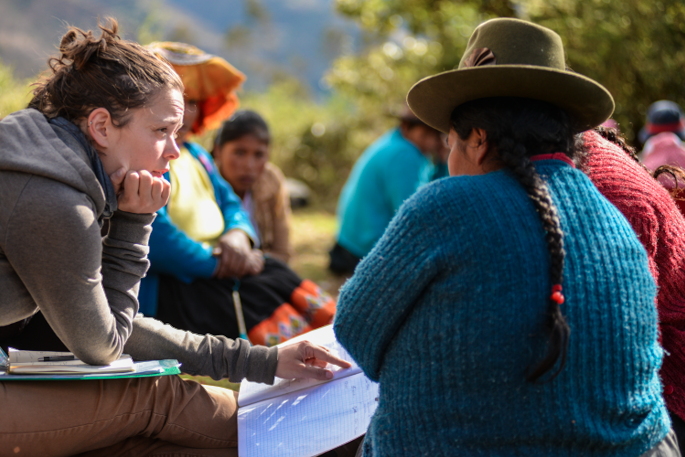 [Ashli Akins listens to the women of Parobamba. Photo by Mike Graeme]

It all started when she began opening her ears to listen to the dreams of the community members.

They spoke of maintaining their ancient textile practice and other cultural traditions; they shared
their desire for economic prosperity and to be active participants in their futures. Some youth
wanted to be chefs and others lawyers. Some wanted to learn computer science and others to lead
tours through their ancestral territory.

However, Ashli learned that despite the region's growing tourism and development sectors the
economic rug was being pulled out from under this community’s feet, preventing them from an
equal opportunity to benefit from the boom and sending them into deeper poverty. 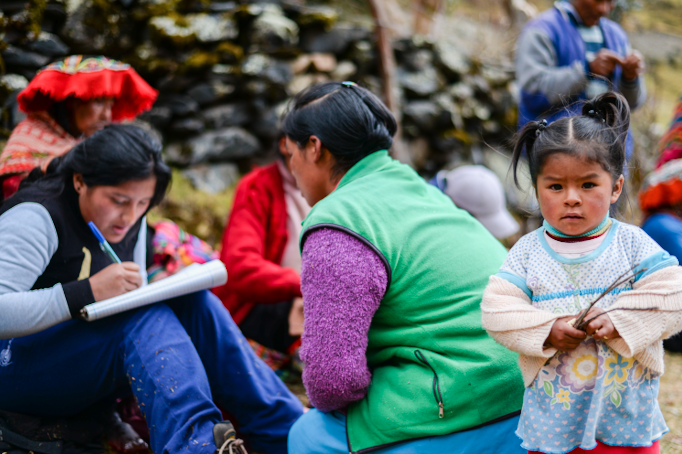 [A next-generation Quechua youth in the community of Pitukiska. Photo by Mike Graeme.]

But how exactly are the people of Ollantaytambo slipping into poverty? This question was posed to
Yolanda (a pseudonym chosen to protect her privacy), a Quechua youth who received a sponsorship
through Mosqoy’s Youth Program in 2012. Her answer was lack of education.

“Because of the lack of knowledge, some people don’t find jobs easily,” she said. “Some don’t
educate themselves; they never got education...They have not even entered the door of the school,
never, and that’s why they can’t defend themselves, they are scared to ask because they’re not sure
if they’re speaking [Spanish] well...that’s why there is poverty” (Lisa & Bosma, 2014, p.31).

When asked why Quechua youth don’t receive education in the first place, Yolanda's answer was
the precise reverse—they can’t afford it. Yolanda points to the vicious cycle presently plaguing
Indigenous communities in the region. Without access to education, poverty is a near-sure bet, and
without the funds to access education…well, you get the point. 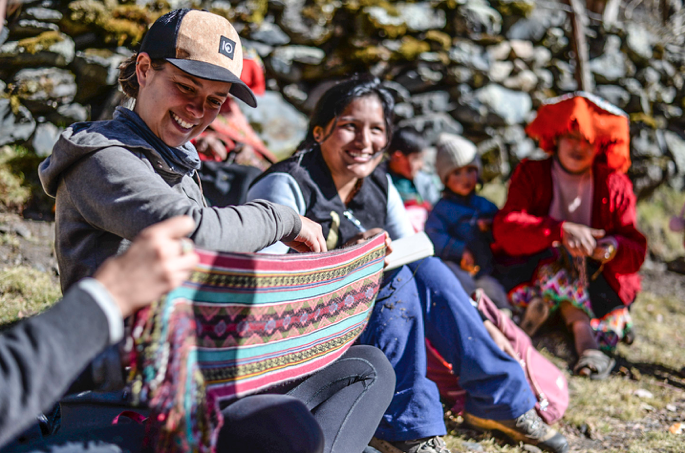 Ashli Akins holds up a freshly woven textile from the community of Pitukiska. Photo by Mike Graeme.]

But is lack of education the only worm at the core of a prosperous Quechua life?

Let's zoom out for a moment and open the whole "can of worms." The ability of dreams to transpire
in Quechua communities is constrained in many ways—a whole can of structural inequalities that
give Quechua individuals an increased chance of being poor and a comparatively less likely chance
of having the means to make their dreams reality.

Here are a few examples:

1.Discrimination based on class and ethnicity runs deep and limits the ability to get certain jobs,
especially those that pay well;

2.Certain pastimes and types of labour are considered “productive” while others (for example,
the Quechua textile tradition) are not equally valued;

3.Without fluency in the Spanish language, many jobs, education, and other opportunities are
inaccessible;

4.Access to social care and health services is reduced for rural communities;

5.Political power is largely held in non-Indigenous hands and political decisions tend to neglect
the needs and rights of Indigenous communities; and

6.Resources can and are being taken from Quechua lands without the wealth ever having to
be returned. 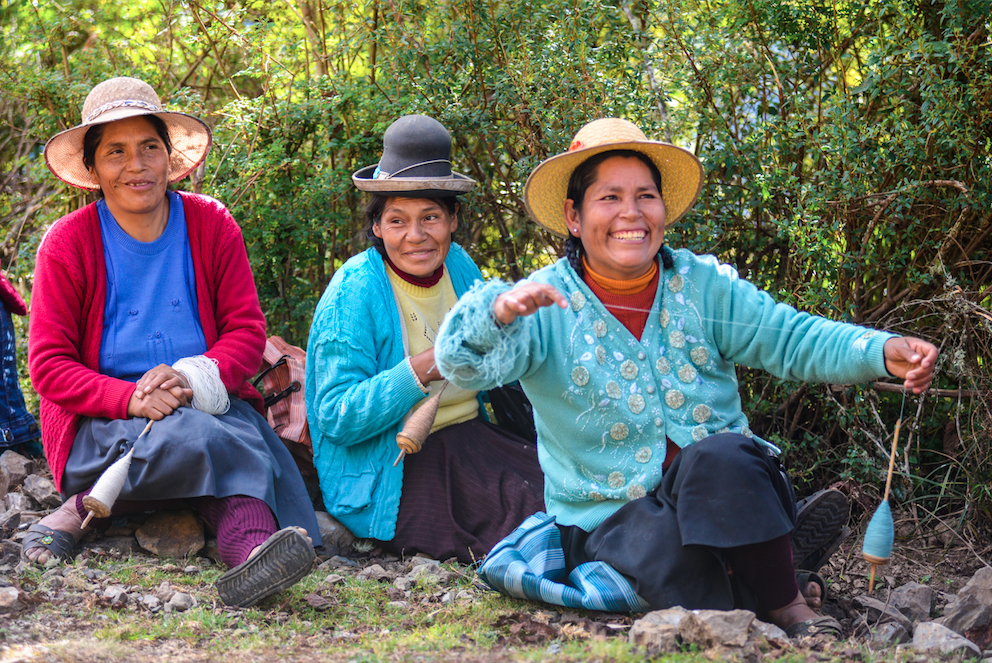 [Weavers from Parobamba spin their wool in preparation for the next textile. Photo by Mike Graeme.]

Access to education, as Yolanda points out, is another such structural inequality, and it is a cornerstone
one at that. Not only can education open the doors to further opportunities within the overarching
structure of unequal opportunity, but it also gives Quechua youth themselves the capacity to shift the
very nature of these structures towards a more just system.

Take for instance, Zenaida (also a pseudonym), a Quechua youth living in Pumamarca whose dream
happens to be influencing structural inequalities by participating in the justice system.

“My dream is to be the best lawyer,” she said. “I decided that because I think with this profession I
could change my country. I see so many problems in my community and most of all I feel sorry for
the children. There are children who don’t even have the most basic of what they could have. Then, I
see Cusco, I see the society, I see Peru...You know, I’m very proud of being Peruvian but I’m not
content with the way Peru is like. I would like it to be better, to be a good country" (Lisa & Bosma,
2014, p.38). 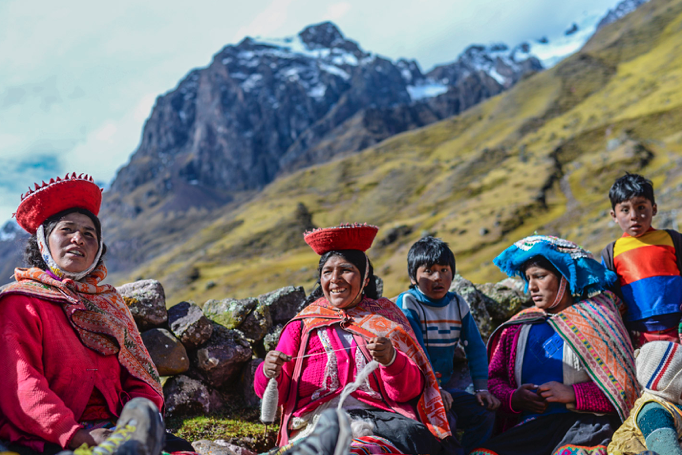 [Children of Cancha Cancha stop playing to join the monthly meeting carried out with the weavers
of the community. Photo by Mike Graeme.]

Without access to postsecondary education, Zenaida's dream is a great wind with no open sail to
propel into a promising future.

But is education intrinsically good? In fact, imposing the Western education paradigm has been an
essential tool of acculturation and assimilation to achieve colonial rule across the world and.
As the documentary Schooling the World points out, the institutionalized education system has
retained to this day the same fundamental motive as when it began mooring its imperial roots:
“To pull people into dependence on a modern, centralized economy…to pull them away from their
independence and from their own culture and self-respect.” 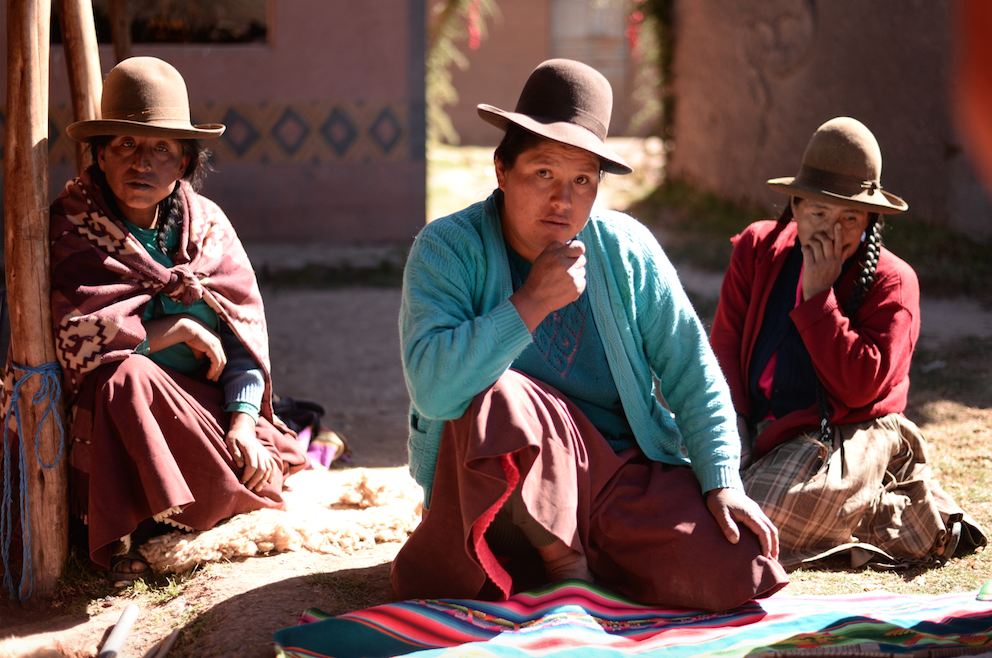 Accordingly, a devastating trend for remote communities today is that when Indigenous youth leave
their communities to pursue education, they don't return. And those that do return often lack respect
for the knowledge and teachings of their elders and communities.

As Bill Fogarty writes, "Education can usurp local social structures [and] cause deep intergenerational
divisions...[If] not inclusive of your social, cultural and economic values [it] is not empowering. It is
disempowering." 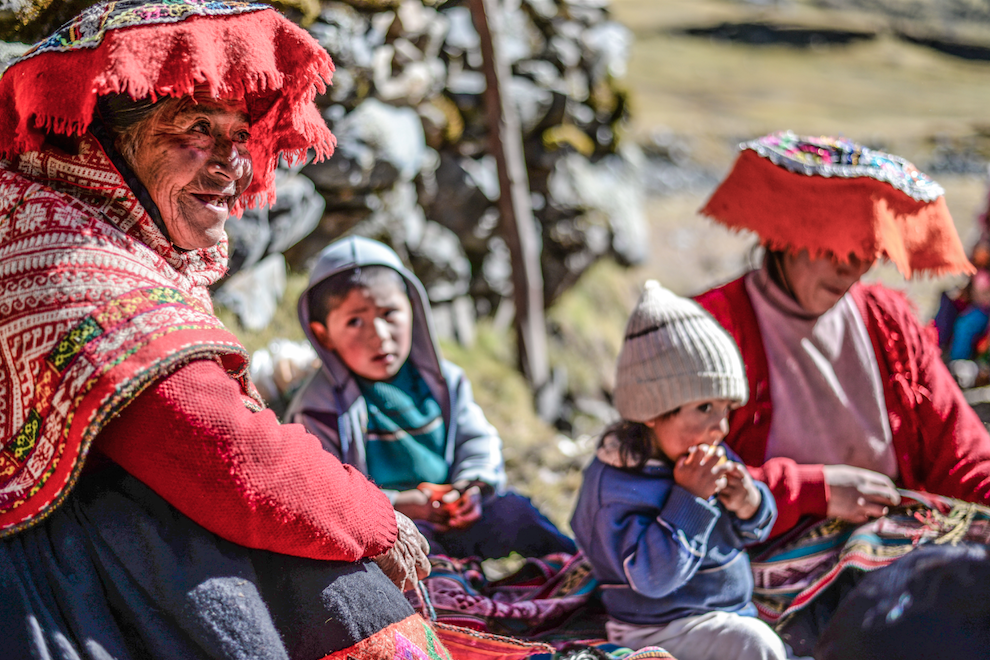 [Children and elders sit together in Pitukiska. Photo by Mike Graeme.]

But when it comes to Mosqoy's Youth Program, things are different. While helping youth access
post-secondary education in Cusco, the T'ikary Youth Program simultaneously promotes cultural
values (like upholding the Quechua textile tradition), social values (like holding respect for the
elders), and economic values (like engaging in reciprocal relationships of wealth and skill sharing). 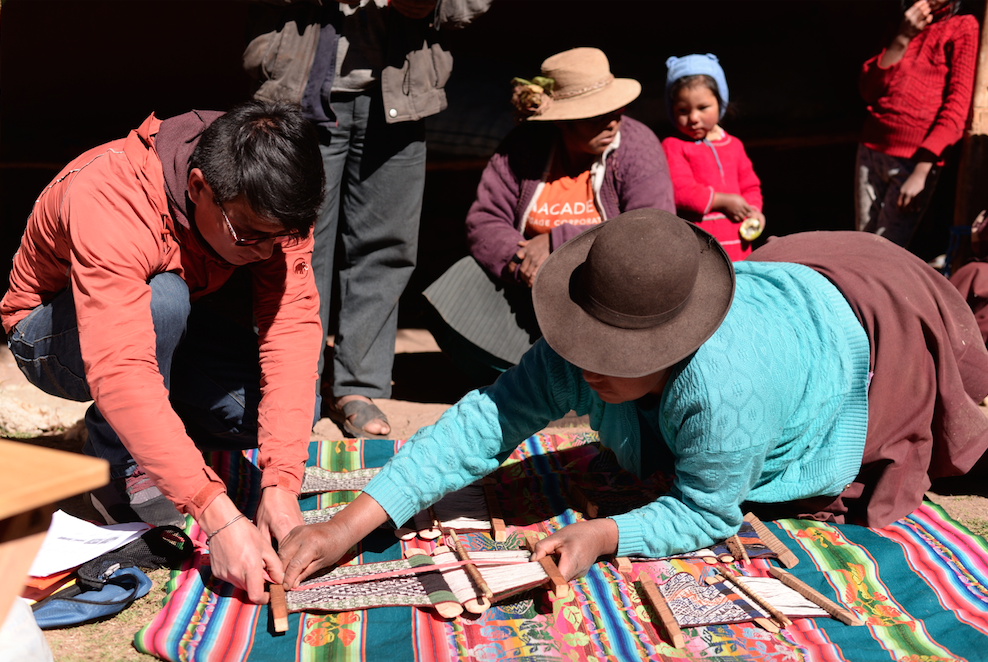 Moreover, Mosqoy observes that Quechua communities are not passive recipients of an imposed
education system, but rather that they have agency, that they can skillfully wield their education to
become versed in the dominant system, and that they can develop into active leaders for their
communities and their futures.

Indeed, a key aspect of the Mosqoy Youth Program is the prerequisite promise by students to channel
their learned knowledge and skills back into their communities. When Quechua youth return after
completing their programs, the first thing they want to do is share and give back what they have
received. 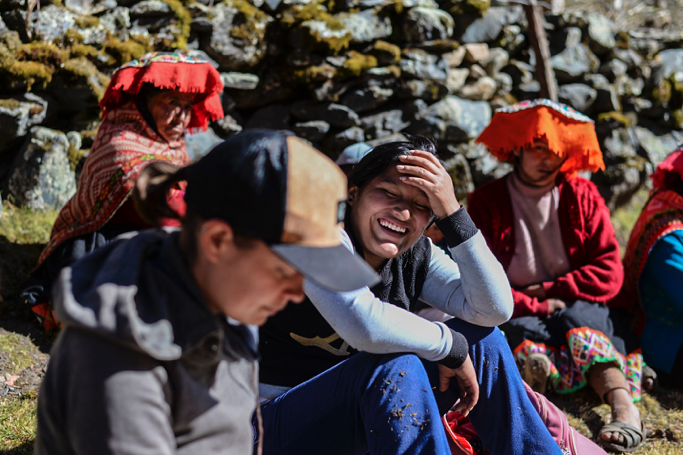 [Silvia Surco, a current student in the Mosqoy Youth Program, has also been hired as a community
liaison. Photo by Mike Graeme.]

The poverty pandemic is deeply ingrained in rural Peru. It is fierce and unrelenting, but the winds
are changing. Dreams of a better future whirl like gales through the Andes, and Quechua youth are
learning to ride them. And those that have, with billowing sails, return to their communities in search
of ways to help untie the dreamboats of their peers, who wait in anticipation to set sail as well. 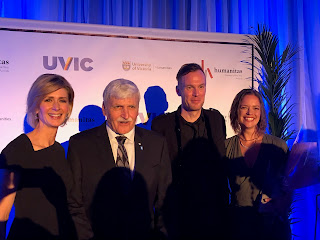 Mosqoy’s founder, Ashli Akins, honoured as Humanist of the Year